Man, today was probably the most laid back day we will have this whole entire trip! We got to sleep in and so I got about 12 hours of sleep which has not happened since I’ve been in Ohio. It was nice to just rest and rejuvenate.

I started my morning getting ready for the church service hosted downstairs. It was about a two-hour service. I should probably mention that one of the main reasons I am in Europe is so that my grandparents can celebrate the Feast of Tabernacles. They asked me to come along and of course I couldn’t turn down a trip to Europe!

The service wasn’t anything too exciting. There isn’t really anyone my age which makes it a little lonely sometimes but the experiences are still fun. For example, after church I ordered myself a cappuccino and sat by the ocean to just drink my coffee, eat a banana, and read and write. It was nice to catch up on “Me time” since I’ve always been surrounded by people while on this trip.

We didn’t have anything planned for today except for dinner at 7:30 since today is supposed to be a High Holy Day and it’s supposed to be a day of rest. My grandparents have been fasting for a day which ended at dinner. So what did I do you may ask? I laid in bed the whole day until dinner and watched some Gilmore Girls and nothing made me happier. There is something about your favorite show that makes you feel like you’re back at home.

Finally, we headed down for dinner and thank goodness because at that point I was starving! We started with a bar of appetizers and I wish I got a picture of it because the appetizers itself looked like our main meal.

At dinner, we sat next to these two amazing women who was telling us all about their traveling stories. They were just so nice to talk to. I really enjoyed having a conversation with a new set of people.

After the appetizers there was another bar but the food was heated and so we all thought that that was our main meal so we ate up only to find out that they haven’t even served our main course yet! So they brought out pasta and it was very delicious and I ate almost all of it and I was so full. They took our plates away and we were all waiting for our dessert and they come back WITH A FULL PLATE OF STEAK AND SALAD! WHAT????!!!!?? I only had one bite of that steak because if I would’ve eaten more I would’ve died. Starting our meal they gave us a white wine with bubbling water but as soon as they brought out the steak they brought out ANOTHER bottle of red wine. I decided that drinking more wine probably wouldn’t have been the best considering the state my stomach was in. After the steak, they brought out two scoops of ice cream to each person. One was vanilla and the other was similar to cookies and cream and their vanilla ice cream was just fantastic. But let me just say, I’ve never eaten more in my whole entire life. And to even think I was starving before I came down…and someone told my grandparents that we haven’t even seen anything yet as far as big meals! That’s crazy. 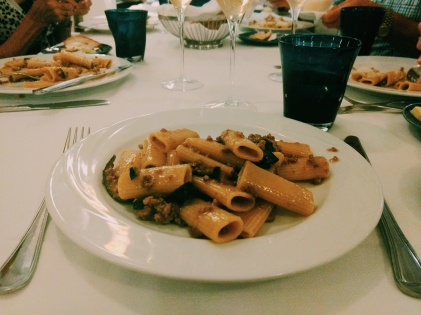 The next three days, if I am correct, are going to be ones of touring Italy. It’s supposed to rain the next two days which is unfortunate because I don’t really have good shoes for rain but I hope that all goes well anyway. I’m also really hoping that I have wifi where I am staying next because I won’t be at this hotel for the next three days. I’ll be staying somewhere near where we are touring. I really want to continue with the “daily” part of my blog posts but if worst comes to worst I’ll just write it in my notebook and post the blogs a little late. Hopefully, that won’t be the case though.

I want to give a big thank you! to anyone who has kept up with my posts so far. It means a lot to me!

I am an eighteen year old who wants to blog for the teenage girls.